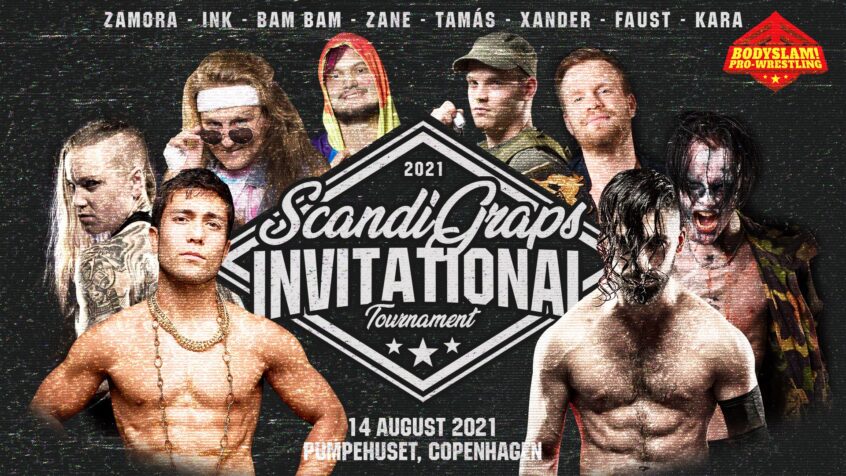 ScandiGraps Invitational 2021 will return on the 14th of August in Pumpehuset, Copenhagen. This year’s SGI is the second edition of the format, which was introduced last year. ScandiGraps 2020 showed us new blood and surprises, as a victorious Emeritus consolidated his status as one of BODYSLAM’s best wrestlers. ScandiGraps Invitational can elevate the winner to new heights in the company. The participants this year include 3 former ScandiGraps wrestlers and 5 tournament debutants. This article will take a closer look at the participants and look at who is competing for the trophy on the 14th of august. 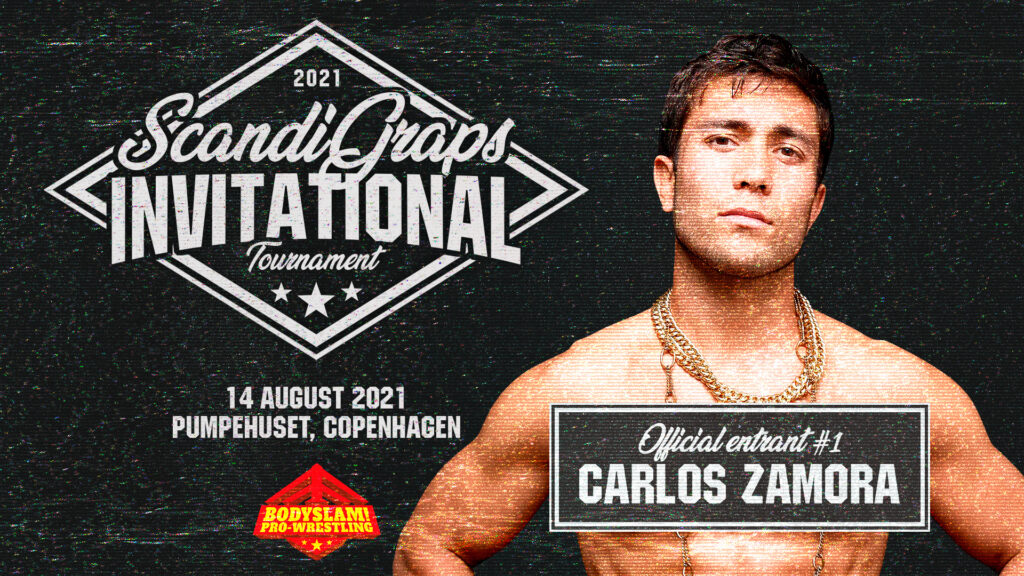 Even though his nickname is ‘El Guapo’, there is nothing beautiful about it when Carlos Zamora steps into the ring. With a background in MMA and other contact sports, Carlos Zamora can take his opponents down with sharp strikes or kicks as well as excruciating submission holds. After having made waves on the Danish wrestling scene, and with a tour of the Philippine wrestling scene, this young star came to BODYSLAM Pro Wrestling in 2020, where he participated in the first SGI. Zamora made it to the semifinals and this year he returns intending to go all the way. Zamora makes his way to the tournament following a big win against the veteran Tank. Time will tell if The Phoenix Foundation has Zamora’s back or if he is going it alone in this tournament. 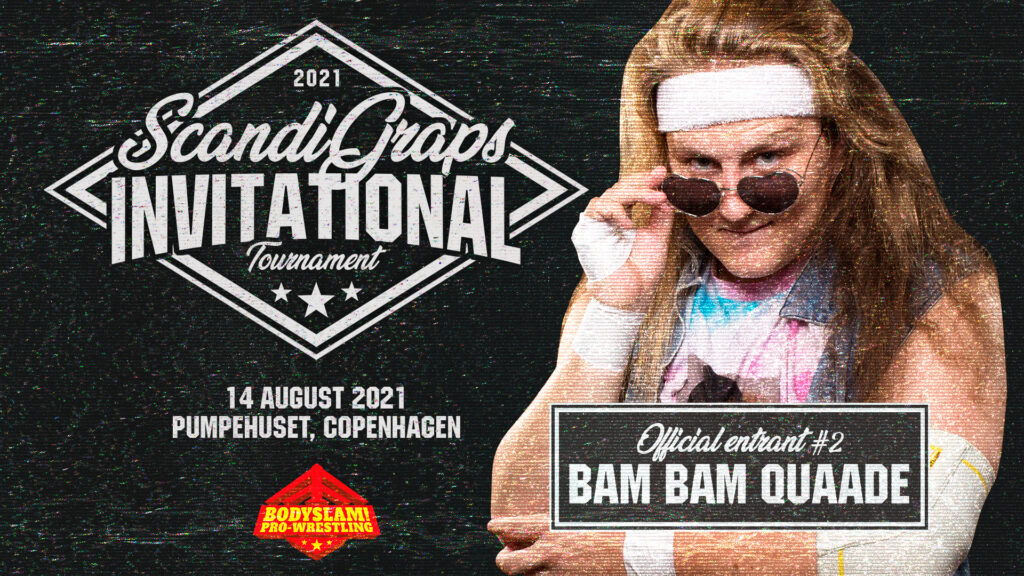 There will be trouble for whoever is standing in the way of the young Easy Lover Bam Bam Quaade. With a smashmouth style that encourages beating his opponent to a pulp and near-constant rulebreaking, there is no doubt that Bam Bam will make the tournament tough on his opponent. It will be one interesting tournament for Bam Bam, considering the controversy Easy Loverz finds itself in regarding the attack on Adonis from Randerspagne and the subsequent theft of his tag team championship. Bam Bam enters ScandiGraps with a target on his back, as he is going to face Xander from Randerspagne in the first round. Will the unadjusted Bam Bam enter alone or will his cohorts from Easy Loverz be at ringside?

WATCH: Someone has attacked Adonis from Randerspagne!
WATCH: Why is Easy Loverz ALWAYS accused? Because they’ve ALWAYS done it! 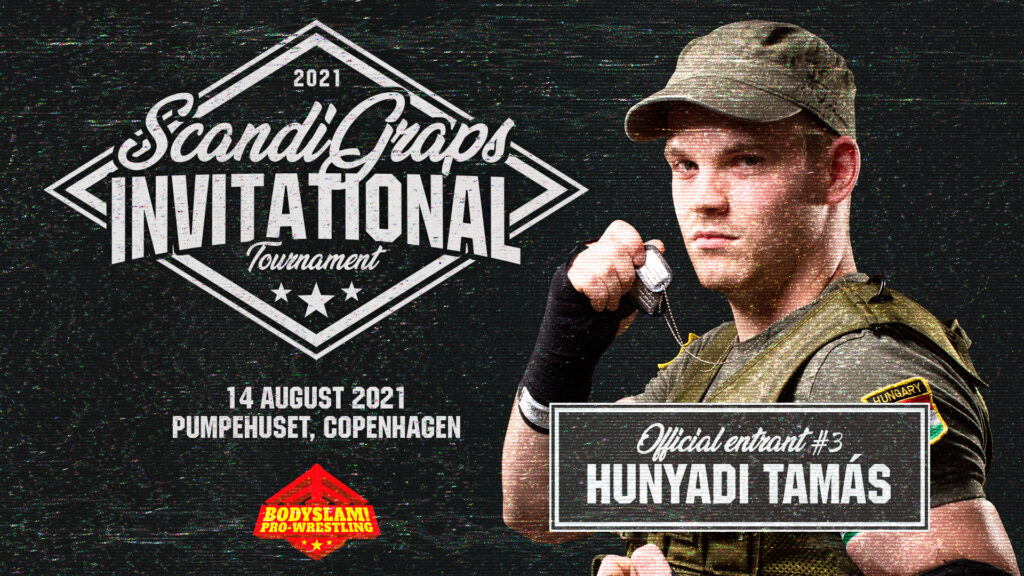 ‘The Hungarian Soldier’ Hunyadi Tamás participates in his second ScandiGraps tournament. Last year’s tournament led to a disappointing elimination in the first round for the Hungarian patriot. With opponents like Michael Fynne, Rick Dominick, and Emeritus, there is no doubt that 2020 had a steep learning curve for the young rookie. Especially his bloody war against Rick Dominick seems to have affected the young Tamás. His latest match against Toby Zane shows this, as Tamás went to unnecessary and ruthless lengths to defeat BODYSLAM’s beloved brony. Will it be a more honorable and humble Hunyadi Tamás we are going to see in Pumpehuset on August 14th or will we see the devil on his shoulder again? 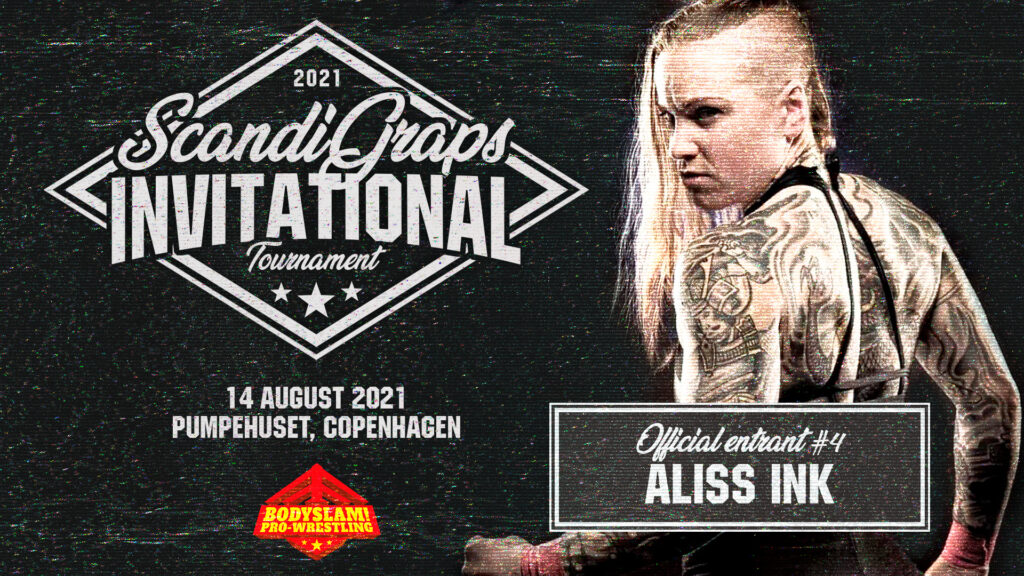 It is going to be with ruthless killer instinct when the Swedish Aliss Ink kicks her way through the patriarchy on August 14th. Aliss Ink carries with her a background in karate and jiu-jitsu when she is going to ScandiGraps Invitational. She has wrestled in BODYSLAM before during the ‘Women’s Fight Night’ show. This tattooed warrior is going to throw stereotypes out the window when she goes up against a male-dominated field. Size and height differences won’t be a problem for Aliss Ink when she breaks the arm of her opponent or knockouts them with a well-placed kick. Heads are going to roll when Aliss Ink comes to Denmark and it will send a message to all wrestlers in Scandinavia if she wins the tournament. 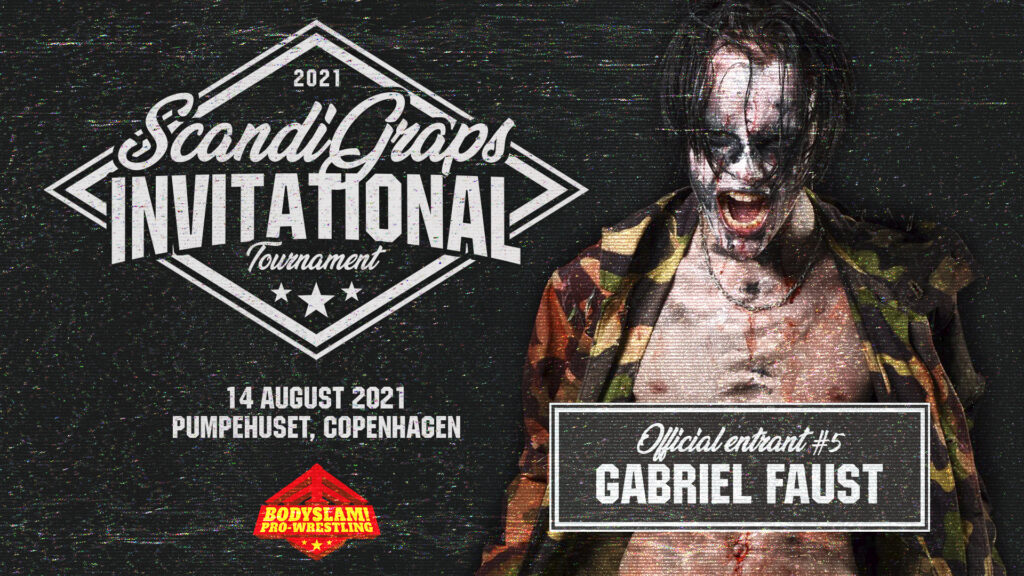 Gabriel Faust is one of two entrants who makes his BODYSLAM debut in the ScandiGraps Invitational. Faust has prior experience on the Danish wrestling scene but comes into this tournament as a joker. This young anarchistic wrestler has a speedy and high-flying style of wrestling that takes his opponents by storm. Faust will be hard to prepare for, and this young talent will certainly take advantage of the chaos that ensues when he steps into the ring at ScandiGraps Invitational. A victory at SGI can change Faust’s career trajectory and turn the hierarchy of BODYSLAM Pro Wrestling on its head. 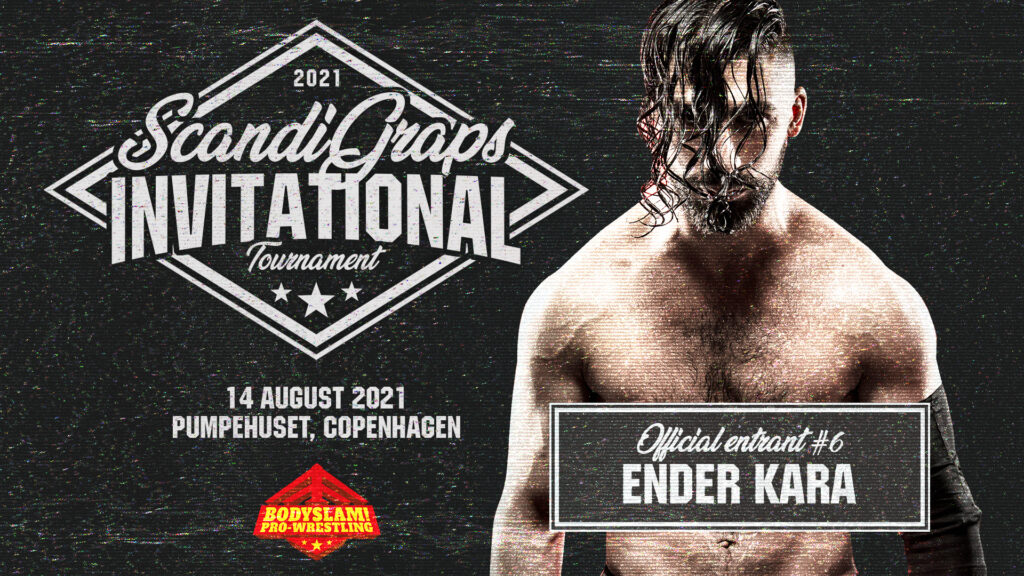 ‘The Turkish Assassin’ Ender Kara comes to BODYSLAM Pro Wrestling after years of hype in Scandinavian and North European wrestling. Kara combines taekwondo with a high-flying and adrenaline-fueled wrestling style that leaves the audience breathless. Even though he is a newcomer to ScandiGraps Invitational, Ender Kara is no stranger to tournaments seeing that he previously appeared in the GWF Light Heavyweight World Cup. Ender Kara can cement his status as Scandinavia’s best wrestler if he wins ScandiGraps Invitational. 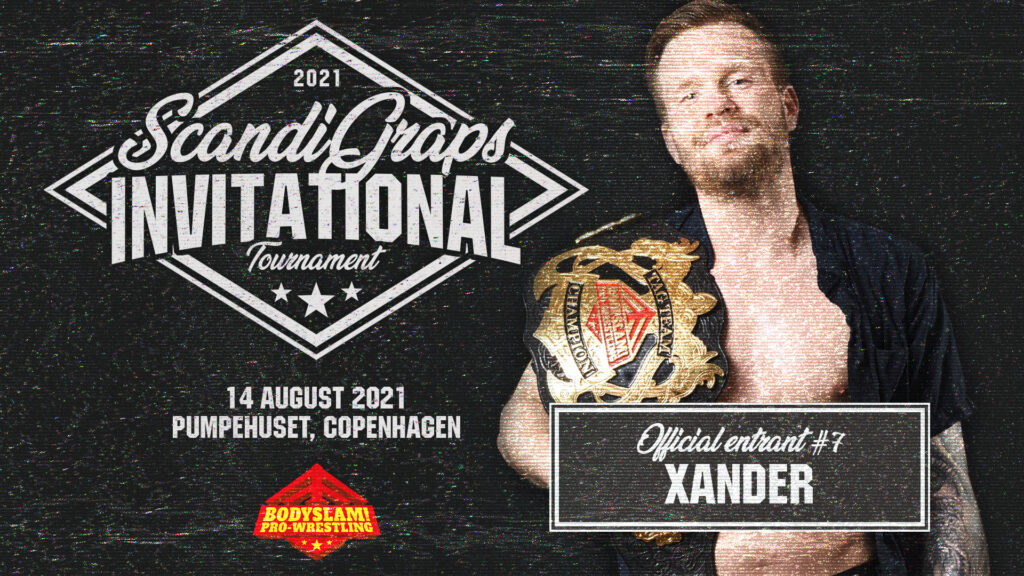 Last year’s finalist Xander is once again stepping into the ring to compete in ScandiGraps. 2020 was a tough year for the funloving partygoer, as he had to change career paths when his tag team partner got sidelined. Luckily, Xander found great success in ScandiGraps, where he showed the fans that he is a capable singles wrestler. This year he is back to go the distance and win the tournament for Randerspagne. The question remains though – Will the mysterious attack on Adonis weigh on Xander’s mind, and will Easy Loverz refrain from interfering in Xander’s tournament? 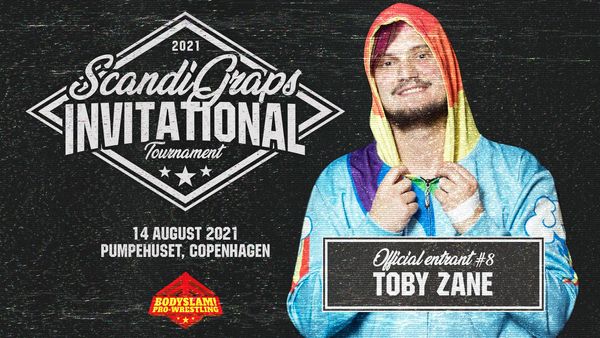 Few wrestlers are as beloved by BODYSLAM fans as ‘#Mylittletoby’ Toby Zane. This high-flying underdog makes his ScandiGraps debut in Pumpehuset. After 2020 led to treacherous friends and a string of losses, ScandiGraps Invitational might be what Toby Zane needs. SGI would be the perfect way for Toby Zane to kickstart his career and gallop towards a brighter future. It’s a long way to the top for the colorful brony with such a starstudded field, but Toby is known for wrestling with his heart on his sleeve, and he never gives up.

Eight entrants step into the ring, but only one can win – Who is going home with the gold in this year’s edition of ScandiGraps Invitational?

Can’t get enough of BODYSLAM? Go to IWTV.live and show your support by using the code ‘BODYSLAM’

The art of living is more like wrestling than dancing. 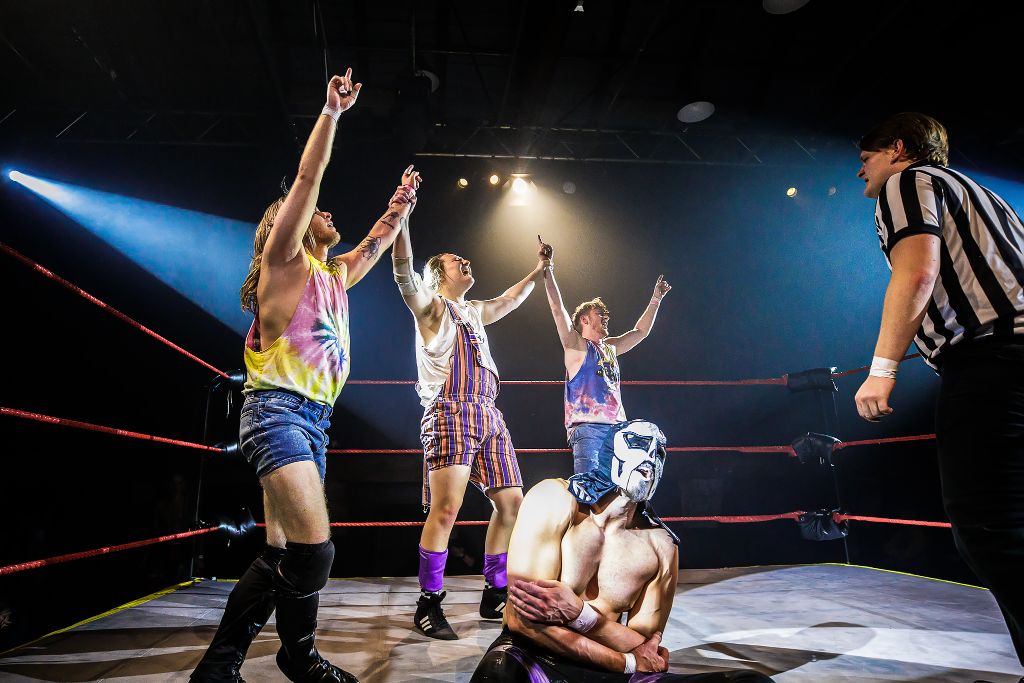